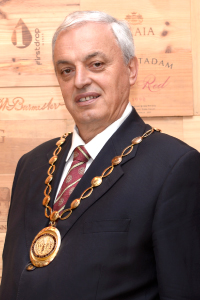 We are pleased to announce the appointment of Michael Tamburri as Chairman of the International Council of Management (ICM*).  He was handed the reigns from outgoing ICM Chairman, Andrew Jones at the last Council meeting held on June 28th 2021. Michael was also appointed Chairman of the Asia Pacific Zone in 2020 and was one of the founding members of the Western Australia branch in 2010 and was President from 2014-2018 and is still a current Committee Member.  He also has a strong background in the Australian wine and spirits trade and has been a liquor merchant since 1970.  He was involved with The Federation of Wine and Food Societies of Australia in the mid-1980s.  Michael is married to Grace and, in addition to running a family wine business, assists in the management of their five grand-children. Michael would like to thank Yvonne Wallis, previous APZ Chair and ICM Chairman for nominating him for this role.  Congratulations Michael and we hope the members, will welcome him and wish him all the best for a successful role of Chairman of the IWFS International Council of Management.

* The ICM (under IWFS Ltd, International Secretariat in London) administers the global activities of the Society on behalf of the three IWFS Zones and consists of eight Directors - four from The Americas, two from Europe & Africa and two from Asia Pacific. The Chair rotates around the Zones and is normally a two year term. The Chair oversees the operation of the Council which involves setting budgets for activities including global marketing and branding of the Society (including merchandise), the Vintage Card, website, publications, lectures, archives and members insurance. During his tenure, Michael has said he will seek to develop stronger tri-zone collaboration with an aim to attract and engage the next generation of members.