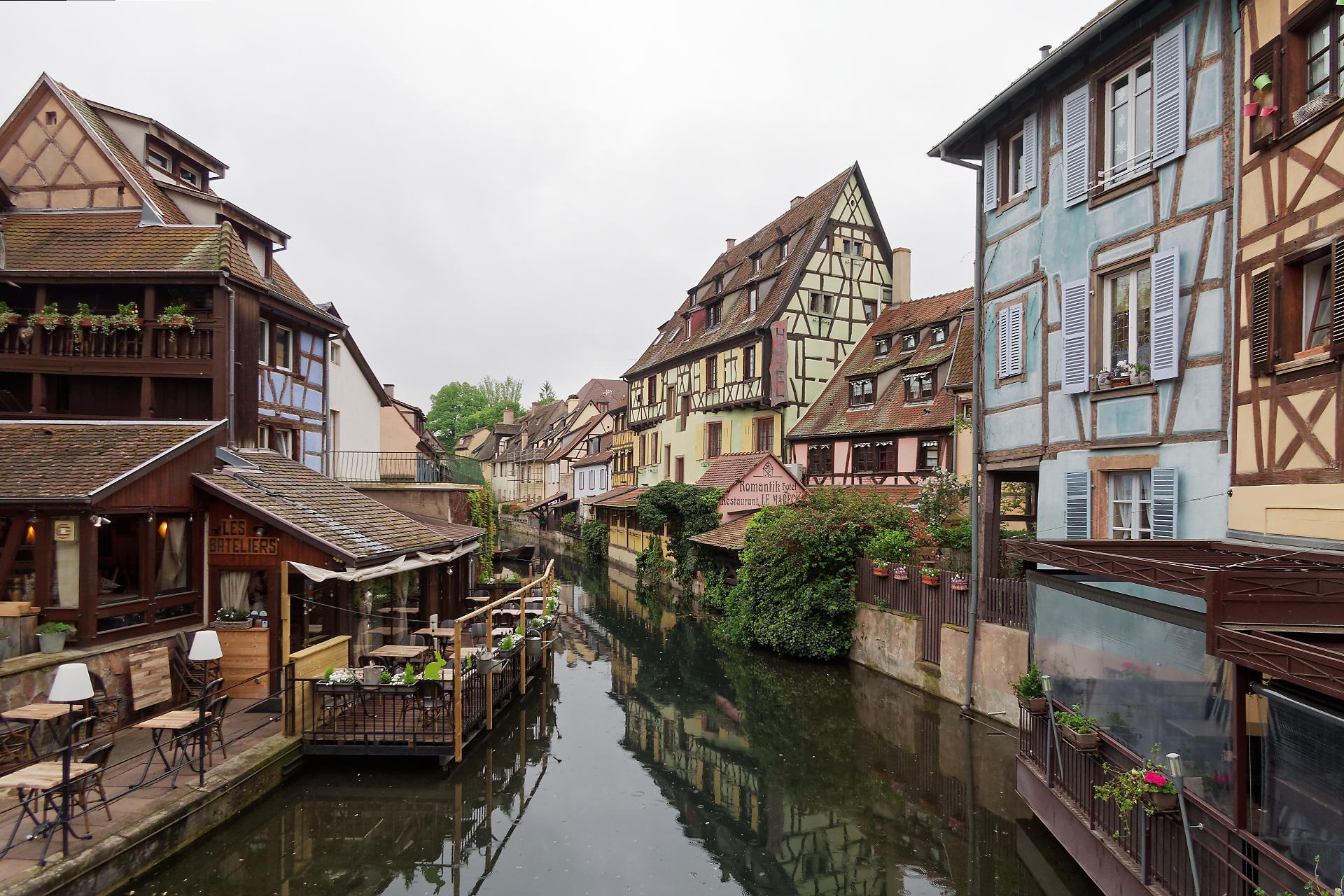 What a culinary and vinous treat this was.  Based in the beautiful medieval city of Colmar, in the valley between the Vosges mountains and the Black Forest, festival goers dined in the Michelin starred Auberge de L’ill and enjoyed wines from  the 7 different Noble grapes.  But this was of course not all.

Members, mainly from the EAZ but with a sprinkling from the Americas and APZ, were also served wines from the 51 strictly controlled Grand Cru vineyards,  Cremant, the designation of Alsace sparkling wine produced by the “methode traditionelle”, was ever present in tastings and meals.

They wandered through the ancient streets of the villages of Alsace and admired the infamous storks nesting high on the towers of many buildings. They also enjoyed splendid lunches and dinners in many venues with the gala dinner being held at the Confrérie St Etienne d’Alsace, where they toured the museum and were also entertained by red-robed officers of the Confrérie to a final wine tasting. 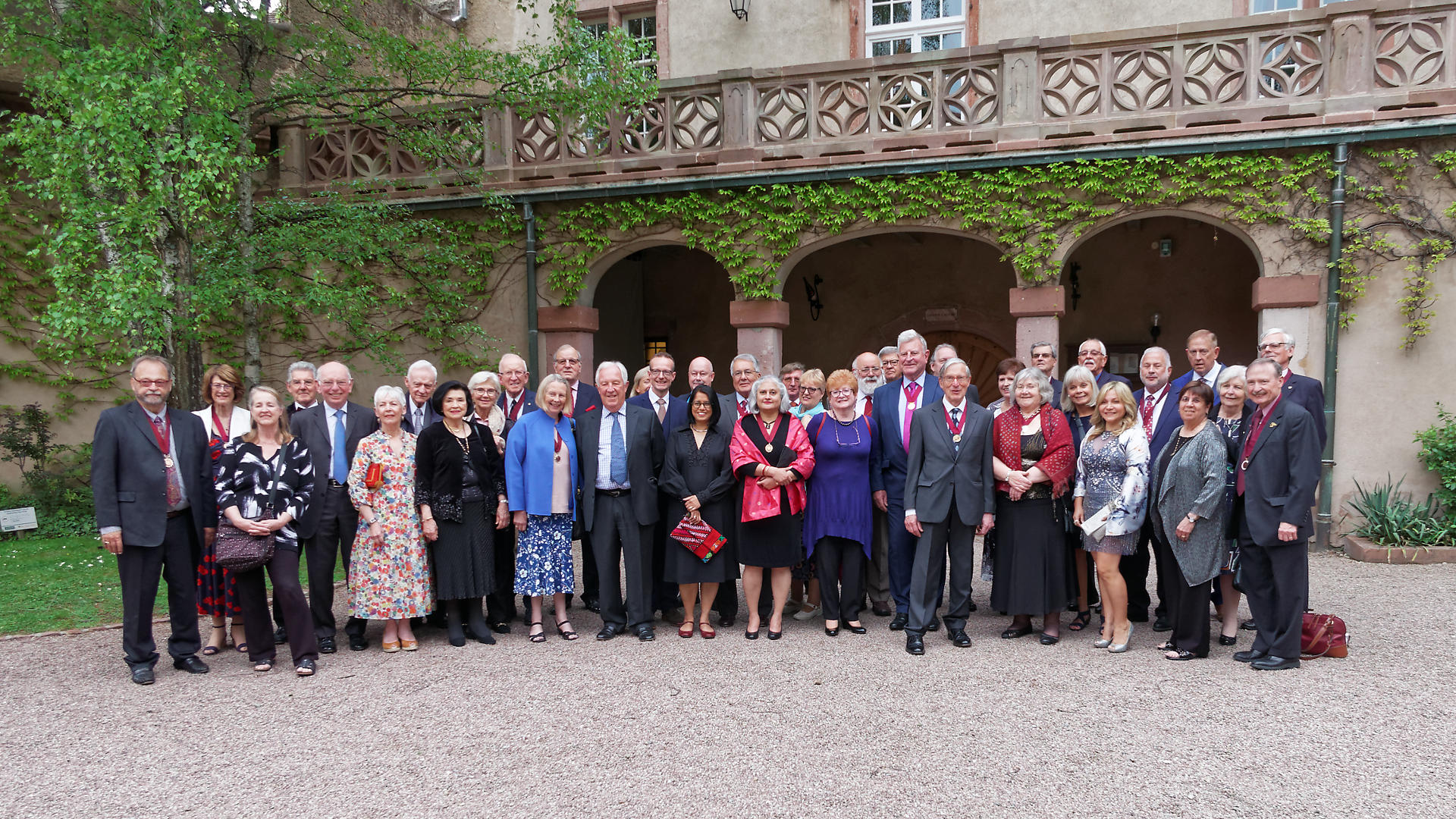 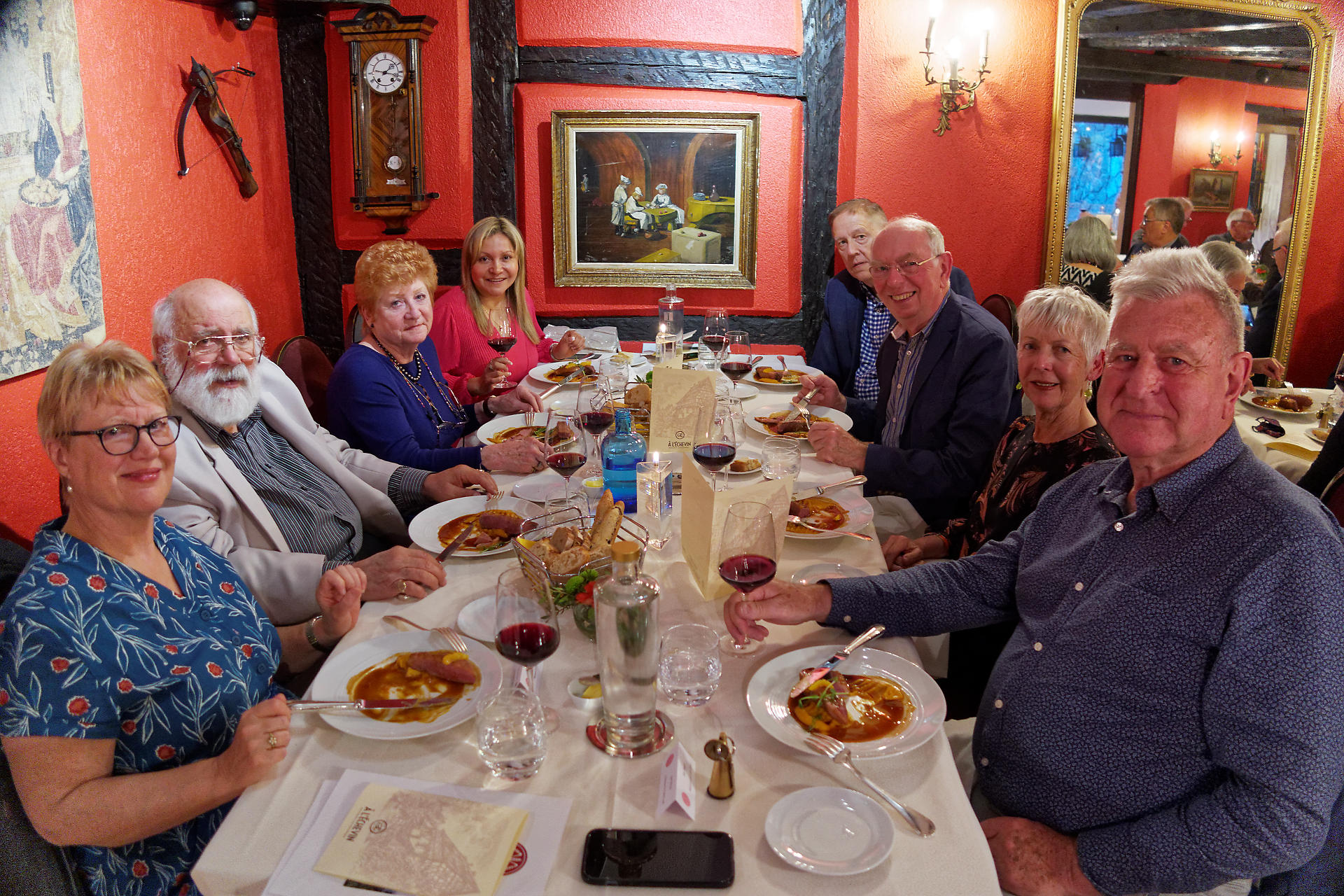 Thanks were expressed to David Ling, a past master of the Confrerie as well as an IWFS wine consultant, and the Confrérie for their assistance in organising this festival. 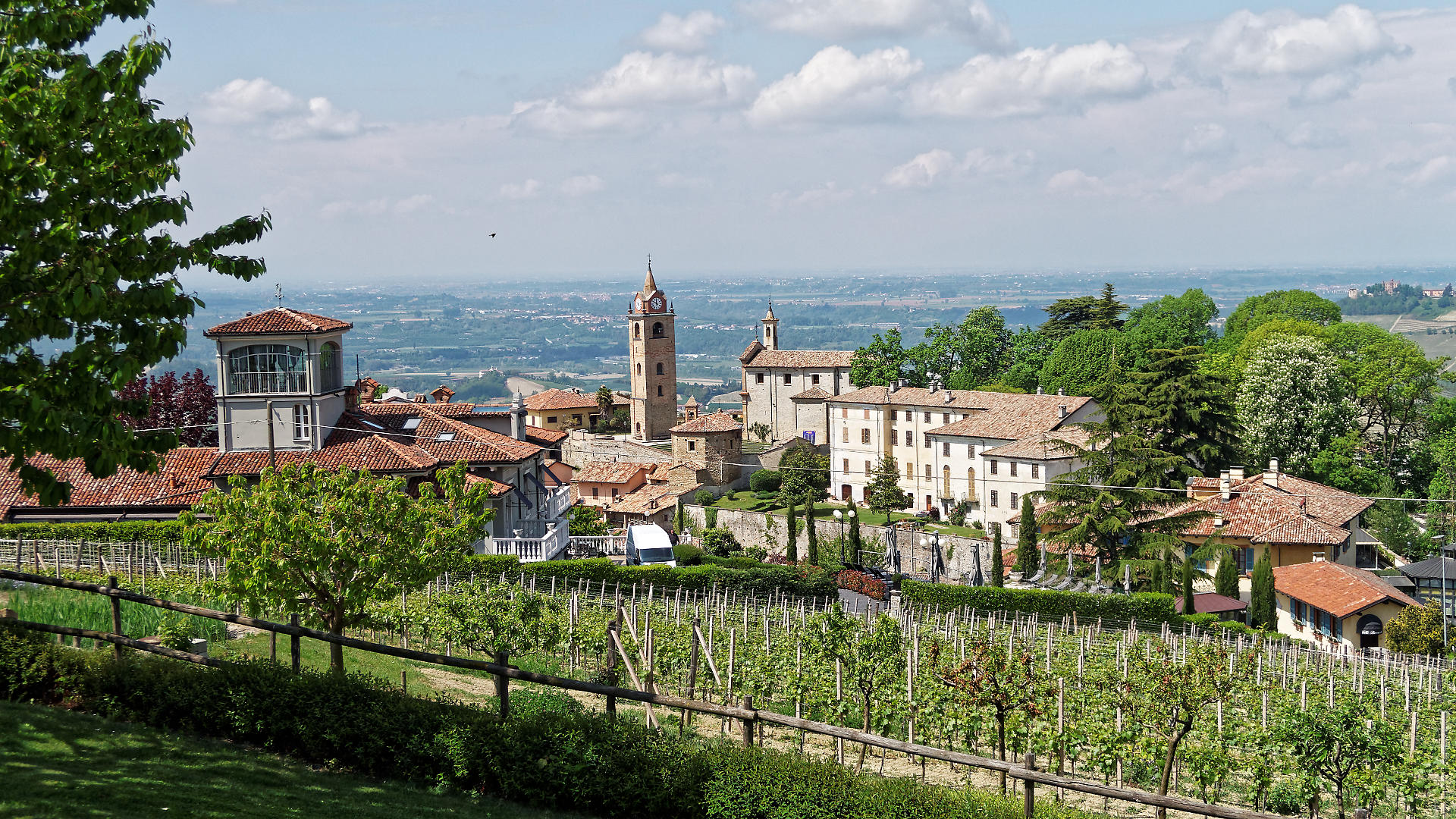 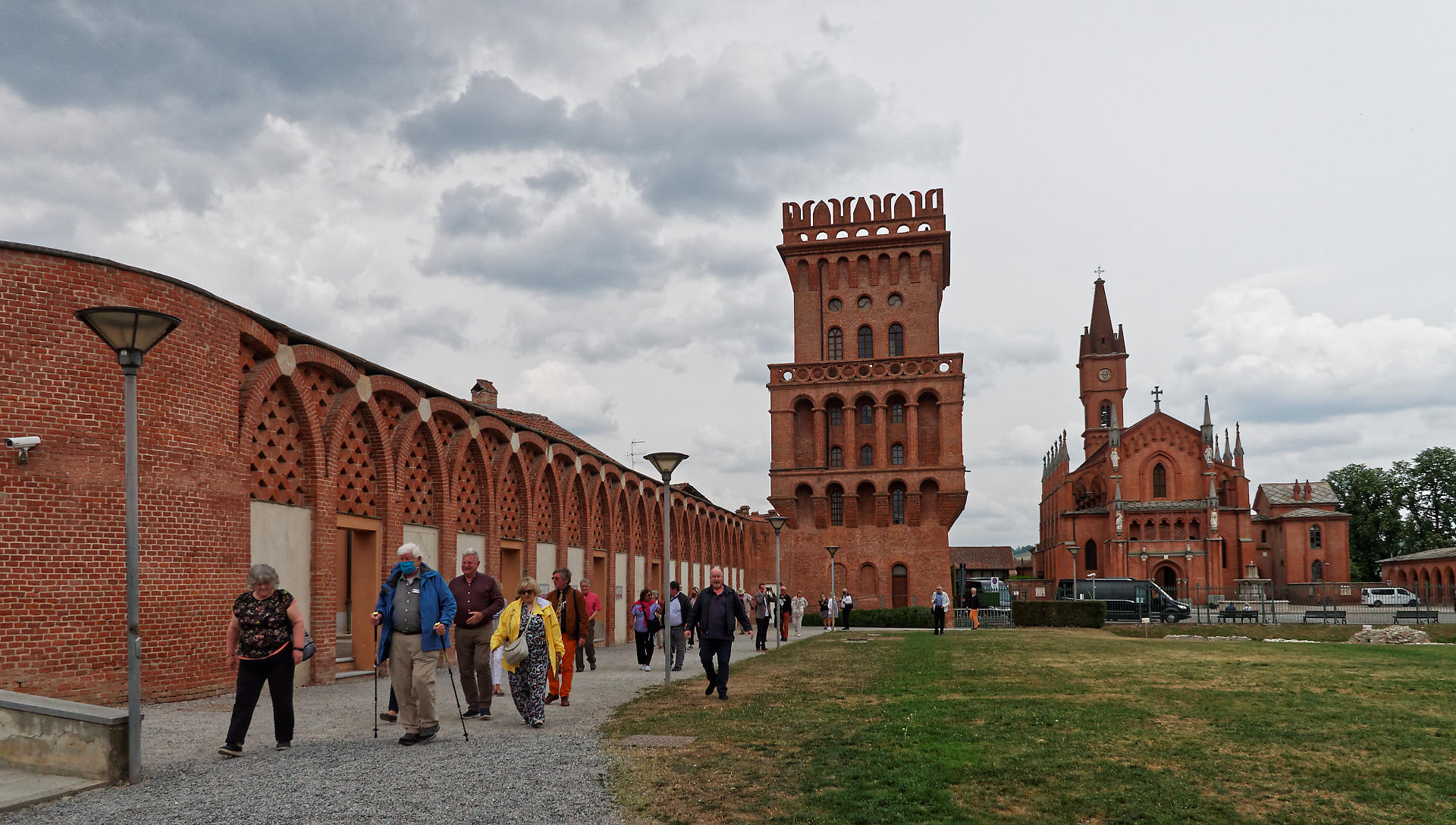 Such a treat for lovers of the wines of Barolo and Barbaresco as members tasted their way through these wines made from the big and bold Nebbiolo grape. Members learnt about the different winemaking processes of the two areas, tasting wines from grapes picked in cru vineyards and from the vines growing on very differenent terroirs.  In addition to the classic Barolo and Barbaresco wines, wines produced from the Barbera and Dolcetto grape and the Arneis and Cortese grape also featured. In addition, they toured an interesting sparkling wine producer that makes wine using methode-champenoise and with no dosage - delicious. 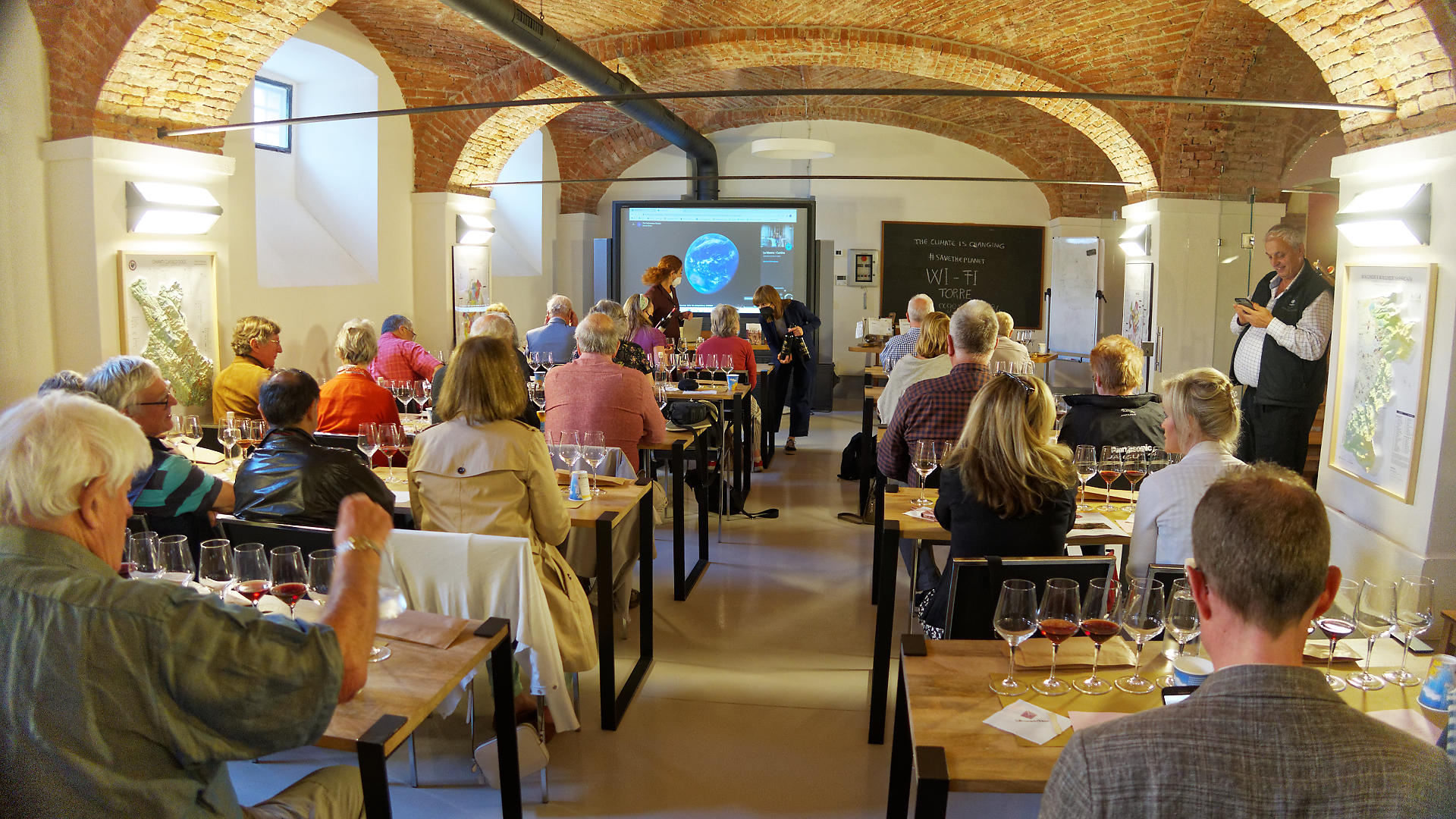 Festival goers were based in the heart of the region, near Alba in the Fontanafredda complex in Serralunga d’Alba, originally built by the first King of Italy for his young mistress and expanded by his son.  A visit to the town of Bra gave attendees their ‘food fix’. Bra is the centre of the “Slow Food Movement” and its University of Gastronomic Sciences. As in Alsace they enjoyed some exceptional lunches and dinners, featuring local produce and dishes. Once again they dined in Michelin starred restaurants - Guido in the Fontanafredda complex and Marc Lanteri on the final night in the Castello di Grinzane Cavour. Phillip Kim, a member of the London branch, organised a great festival and was thanked and recognised at the final dinner. 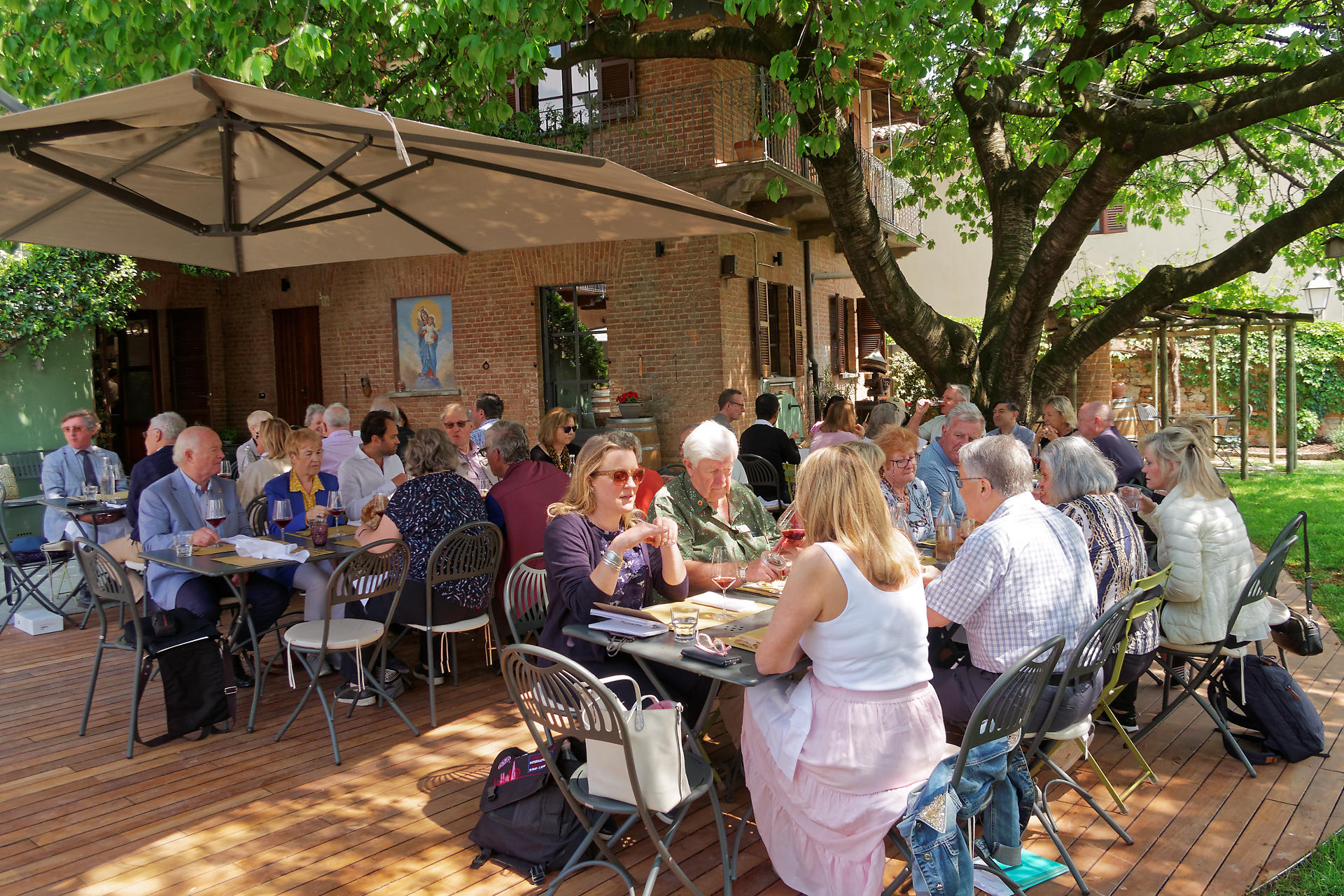 The Alsace and Piedmont festivals were a fitting conclusion for Stephanie Shepherd for her unstinting efforts as EAZ festivals and events co-ordinator. Many of the festivals were organised by her and they included the very successful 2018 IWFS triennial festival in London. Her contribution to EAZ and the Society has been very significant and she fully deserves the thanks and praise bestowed on her for the many enjoyable festivals. 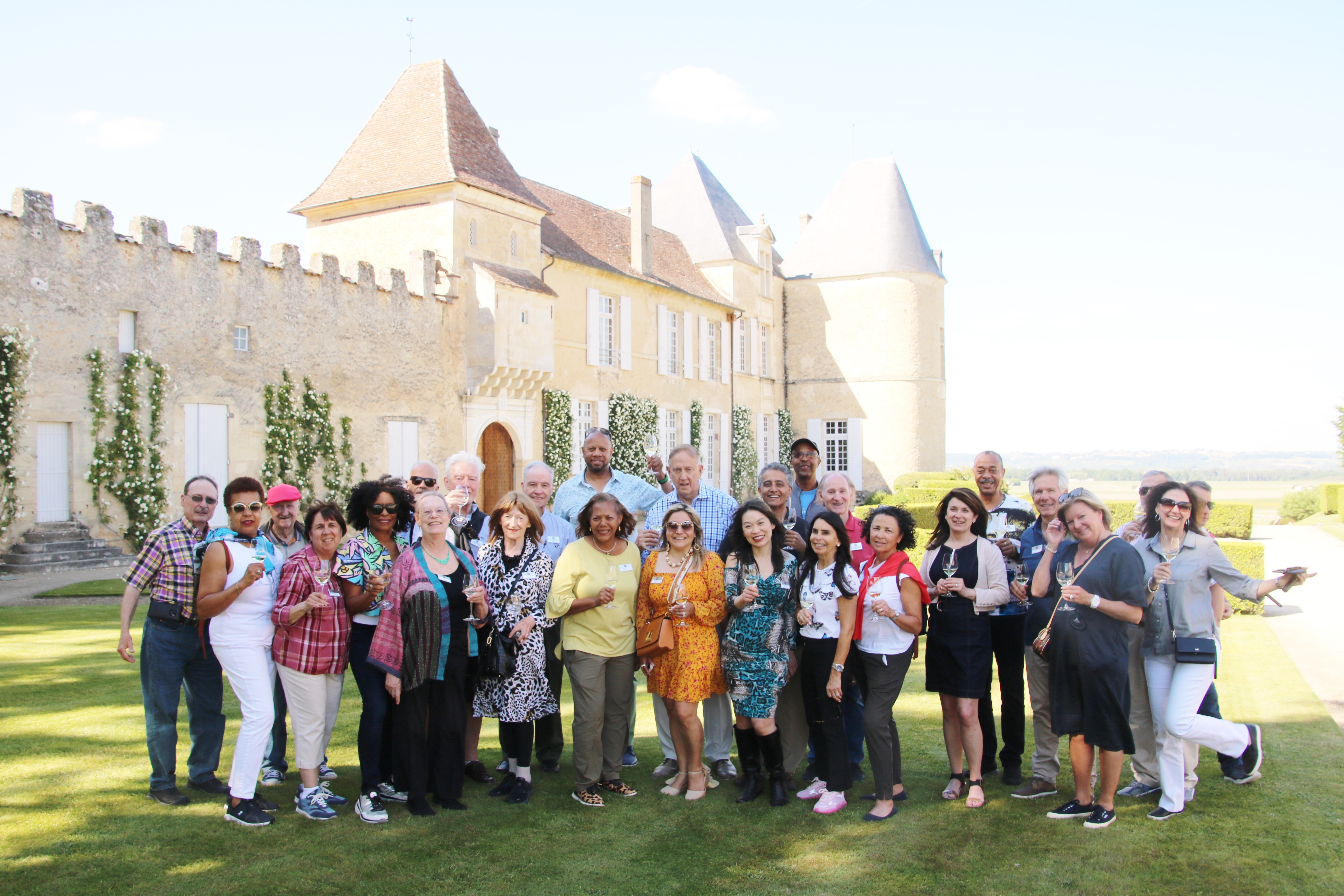 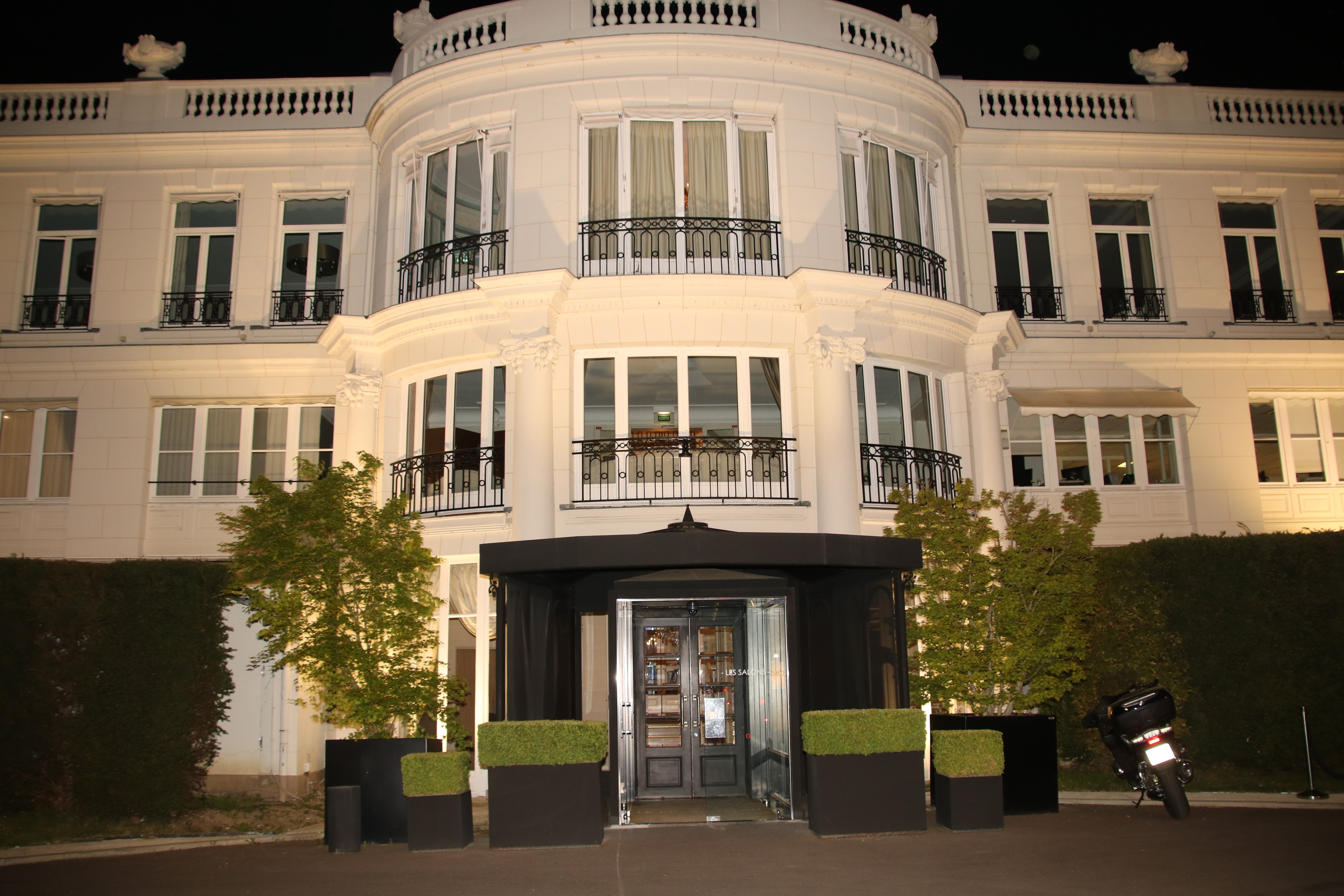 Wow – this was the trip of a lifetime! 106 members were part of the exhilarating and extraordinary nine-day festival in the beautiful cities of Paris and Bordeaux.  Paris was a full-on cultural experience – dining at the top venues inc 3* Michelin Le Pré Catelan (pictured above), dancing at the Lido, visiting the Fondation LVMH and cruising along the Seine.  In Bordeaux, members were transported to a very different world - the hallowed world of fine wine (and food), with visits to so many top chateaux, including Yquem (pictured above) and Lafite Rothschild, it was quite unbelievable. 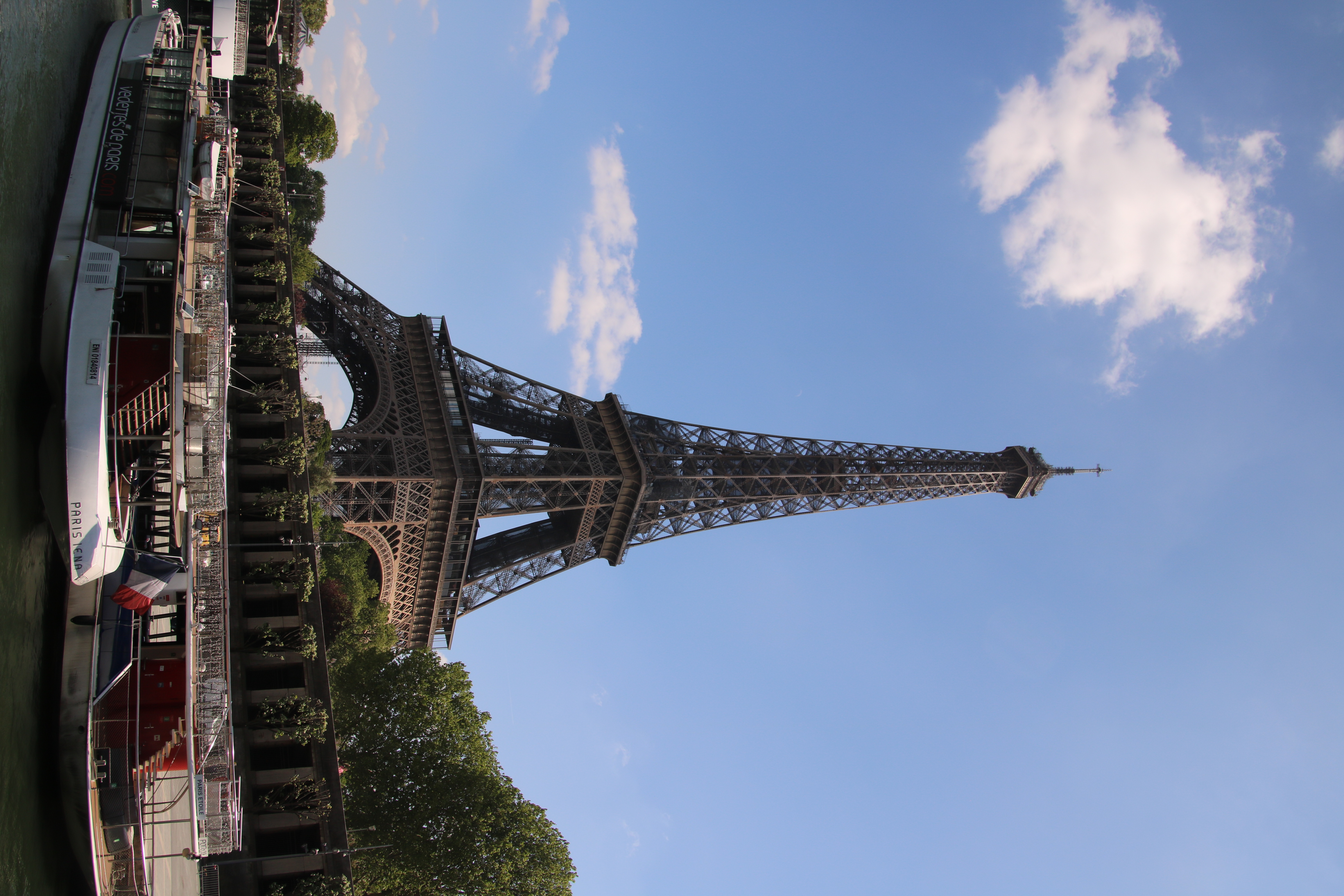 While in Paris for three nights, our members stayed at the luxury, award winning, Five-Star Mandarin Oriental Hotel, which offered world-class accommodation. They dined on exceptional cuisine at Michelin starred restaurants, experienced the unrivalled Lido de Paris dinner show, and of course they shopped.  Paris is the best place for haute fashion, with an impressive array of high-end boutiques. Next, attendees traveled by TGV, a high-speed train (aka as a fast train), to Bordeaux where they stayed six nights at the Five-Star InterContinental Bordeaux - Le Grand Hotel. 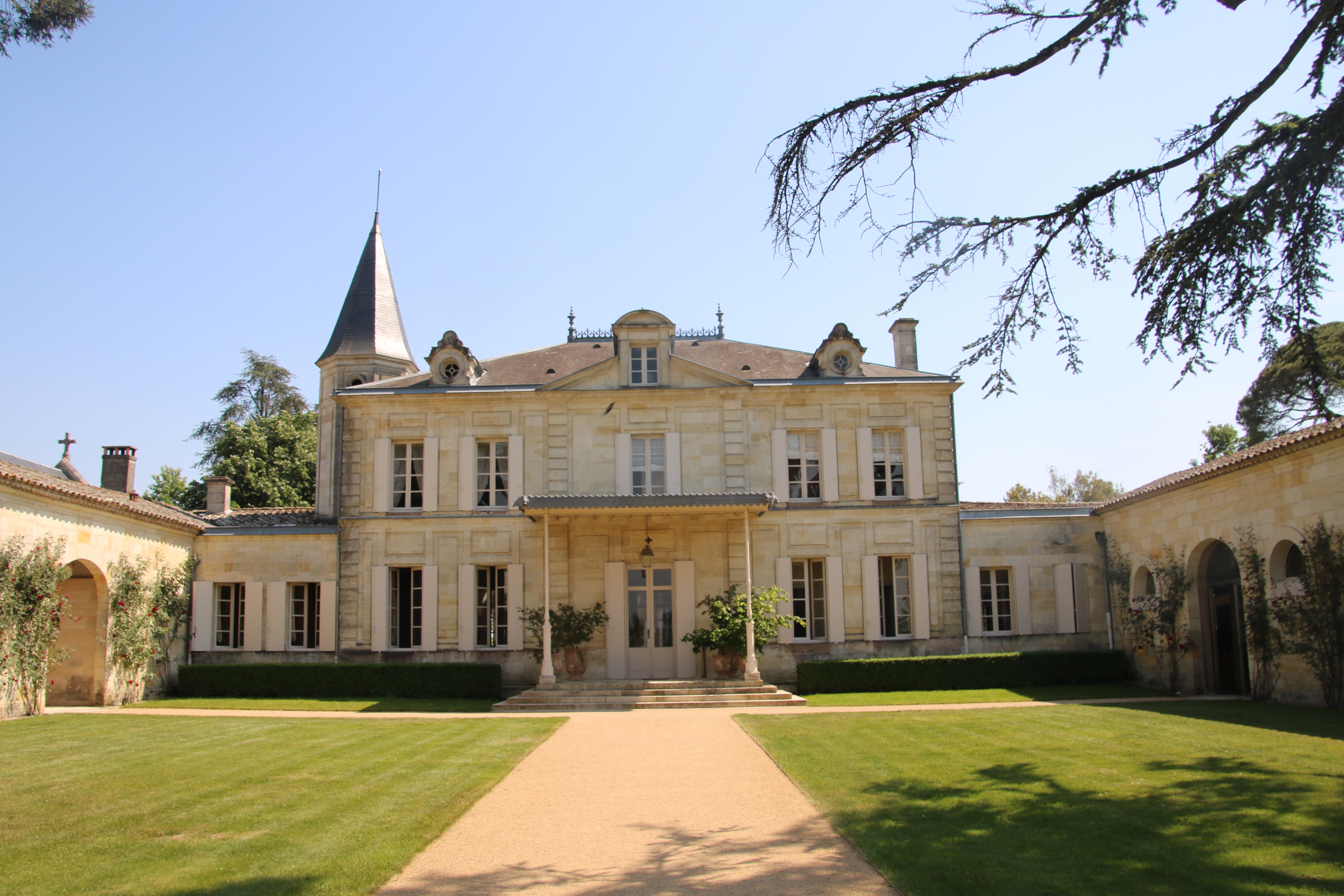 During their sojourn attendees were part of smaller groups to enable private tours and tastings at France’s world-renowned wineries: Chateau d’Yquem, Mouton Rothschild, Lynch Bages, Domaine de Chevalier, Mouton Rothschild, Lafite Rothschild, and Cheval Blanc to name a few. Numerous members expressed this was the wine trip of a life time.  See the full report on this amazing trip in the Summer 2022 edition of Wine Food & Friends.