The Annual General Meeting (AGM) of IWFS Europe Africa Limited will be held at the Grand Hotel, Torquay at 10.00am on Saturday, 24 September 2022 followed by the Members’ Forum and a buffet lunch.

All members are entitled to attend the AGM and ABRM, for which there is no charge. There is a limit of 40 attendees for the extended programme. 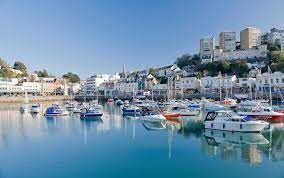 As has become traditional over the last few years an event has been organised around the formal proceedings of the AGM/Members’ Forum, to which members of APZ and Americas, as well as EAZ, would be welcome.

The event will take place in Torquay, based at the Grand Hotel, and will include dinner at a long-standing Michelin starred restaurant, as well as visits to nearby locations in the beautiful South Devon countryside.

Registration and payment of £385 for members (non-member guests £400) for the event must be made through the IWFS website.  Click here for details.

Our base will be at the iconic Grand Hotel (https://richardsonhotels.co.uk/the-grand-hotel/ ), on the seafront – opposite Torquay Railway station. There are swimming pools and a spa in the hotel. There are parking spaces in the garage and some dedicated parking on the forecourt of the Railway Station. PLEASE LET THEM KNOW IF YOU WISH TO HAVE PARKING.

The Grand Hotel first opened its doors in 1881 in response to the Great Western Railway’s Expansion into the Southwest.  It has been a landmark hotel for 130 years except during the Second World War when it was requestioned by the Royal Air Force.

The Grand has welcomed many famous guests, notably the world renowned ‘Queen of Crime’ Agatha Christie and music legends like the Rolling Stones.

We have negotiated a very competitive rate for the weekend and the hotel will also host the AGM and Members’ Forum on the morning of Saturday, 24th September.

Participants do not have to stay at this hotel, but if you do not, it will be your responsibility to ensure that you are at the hotel in time for transport.

Festival registration will be at 4.00 pm at the Grand Hotel.

The first event will be dinner at 7.00 pm at the 1 Michelin starred Restaurant - The Elephant.

It is a bright informal restaurant run by Chef Proprietor Simon Hulstone and his wife Katy. It has maintained its Michelin star for 15 years. This is a walk of about 20 minutes along the seafront promenade.  This will be a “suits and ties” dinner.

10.30 am we will depart from the Grand Hotel to Sandridge Barton - the home of Sharpham Wines for a tasting of their wines and a walk in the vineyard followed by a platter sharing lunch (including a selection of Sharpham’s cheeses) and Sharpham’s wines.

We will return to our hotel for a short break before we proceed to dinner.

At 5.15 a coach will pick us up at the Grand Hotel to take us to Wild Artichokes, Kingsbridge.

Jane Baxter and Samantha Miller met at The Riverford Organic Farmers’ field kitchen. Five years ago, they teamed up to start Wild Artichokes.  Jane does the cooking and Samantha organises.

Jane Baxter was the Chef responsible for starting up the style of food and service at Riverford Organic Farms. She has also written the recipes for the two Riverford Farm Cookbooks.

This is an informal evening.

The EAZ AGM and Members’ Forum will take place at the Grand Hotel in the morning at 10 am after which a buffet lunch will be provided.

Dinner on Saturday evening at the Grand Hotel, at a supplementary cost, has also been organised for those staying on after the AGM/Members’ Forum for an extra night in this beautiful part of South-West England.  Separate registration will be required for this dinner.

The cost for dinner is expected to be about £65 per person (non-member guests £70). Please express your interest when registering for the main event by selecting the dinner option in the 'Post Festival Event 1st Choice' box.  Payment will be required when we know how many have registered.